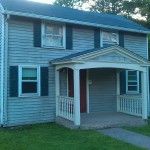 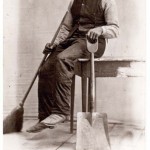 Built on a brownstone foundation, 11 Vine was constructed in 1848. In the late 1840s and 1850s, the house was owned by Ebenezer Deforest, who also used to own 9 Vine. At one point, he mortgaged the house to John Cambridge, a resident of 9 Vine. In 1860, Deforest sold the house to John’s son, Edwin Cambridge, who was a seaman.

According to the 1864 state record, 11 Vine was sold to Isaac B. Truitt, a seaman from Delaware. Although Isaac started his career as a seaman, by 1870 he was listed in the census as a laborer. Isaac worked for Wesleyan University as the school’s chimney sweep, cleaning the stove pipes in student rooms until his death in 1877. He seems to have become a prominent figure among the students, for he frequently appeared in various 1870s student yearbooks with a photograph of him sitting on a table with a shovel and a broom.

Looking closely at the house ownership, exchange and various house occupants, allows us to focus further on the sense of stable community within the Beman Triangle. Furthermore, the case of Isaac Truitt also illustrates the beginning of the close relationship between the larger Middletown community and Wesleyan University.