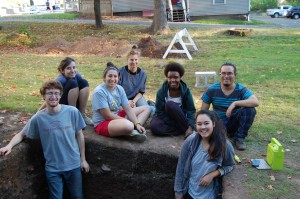 Individuals honoring the gravesite and remembering Silva Storms, who was born in Africa and lived as an enslaved person in Middletown, include (left to right) Visiting Assistant Professor of African American Studies Jesse Nasta (far left), Professor Liza McAlister, chair of the Department of African American Studies (far right), and Jumoke McDuffie-Thurmond ’19 with Chief Ayanda Clarke ’99 (center). Congregants who traveled with Chief Ayanda (wearing white, left to right of center: Monica John, Shelby Olatutu Banks, Nkosi Fajumo Gray, and April Alake Silver) also gathered for the ceremony led by Clarke. Next to the Storms gravesite is that of Nancy Williams, a relative of Storms. (Photo by Wendy Black-Nasta P’07)